I was watching an episode of Andy Griffith recently, the one where the new and very young Doctor comes to town.  Of course, Andy and Aunt Bea have him over for dinner.  During the course of the meal with several town busy bodies the Doctor is judged, rather harshly, for his inadequacies with a carving knife.  Well, as the Mayberry folks ate dinner and scowled at the poor doctor, I couldn't help but notice... they were eating on Ironstone plates!  And this is the part of the story where you realize that I'm nutcrackers for paying attention to their DISHES.  In all fairness you'd probably be right.

Moving on.  Saturday was pretty well a bust for me, as I already told you.  Sunday however, was a turn around.  I found the kitchen table AND the floor beneath it!  Who knew?!

An update on the rug..  IT WAS PERFECT.  Not only perfect, but bigger than described in the ad.  It didn't fit in my foyer and it went straight to the living room!!  Made me a little less guilty about the $75 too :)  I can't show you yet, because I've been working in there and I want to save that for it's own post.

I'm afraid I only have one small update to show you today.

Remember the sheet music from my co-worker?  Here's the end result: 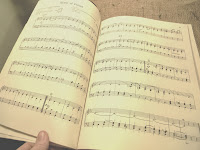 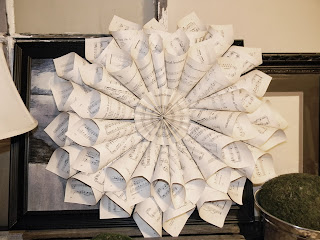 Nifty, huh?  I brought the pictures in to show her and she's asked me to make her one as well! :) I can't take full credit, I saw something similar and imitated.  When it turns out this good, I'm ok with that!
Have a good Monday!

I love this!!! So awesome! You have great talent!

I'm flattered! Thank you :) AND thank you oodles and bunches for my first ever comment!!!!

Cool stuff Anita! Do you have you directions or a website that you can direct me to?

No, I'm afraid not. This is all a little new for me. I may put up a FB page next week after I get the shop set up. Thank you for reading and commenting. It tickles me to know that people enjoy it. :)